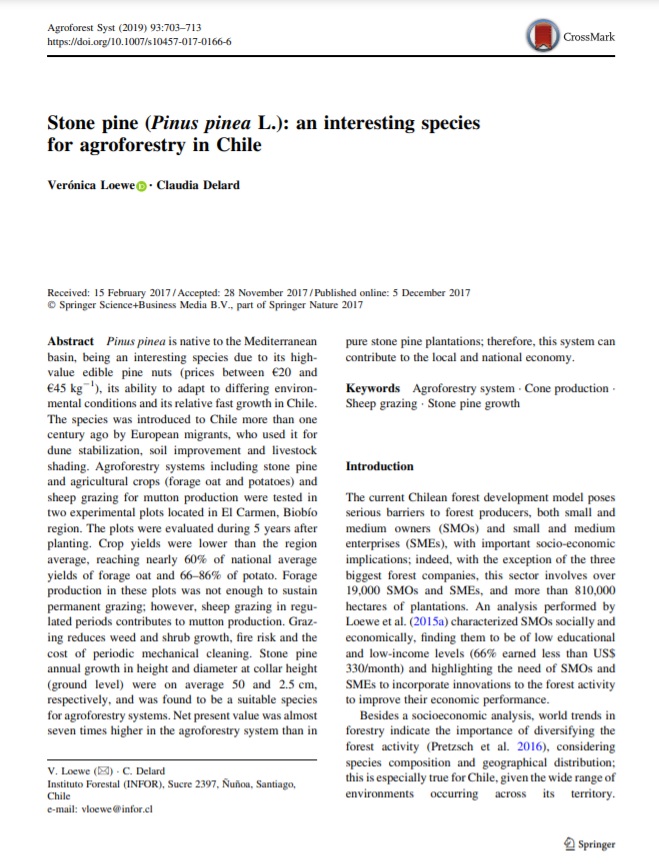 Pinus pinea (stone pine) is an important species for its delicious seeds –the pine nuts–, the most expensive dry fruit worldwide. In native habitats, planting density is a key silvicultural tool in this highly heliophile species due to its impact on growth and cone yield. In Chile, the densities of adult plantations are medium and high. The goal of this study was to assess the impact of density on growth and cone yield in established plantations. Thirty plantations, 15 at high density (1,667 trees ha-1) and 15 at medium density (500 trees ha-1), were matched into 15 pairs of similar plantations regarding age and site characteristics. Planting density had a significant impact on P. pinea growth and cone yield. The medium density was associated with 46 % higher diameter-at-breast-height (DBH) and 2.8 times higher cone yield than those presented by a high-density plantation scheme. However, at 500 trees ha-1, average tree height might turn cone harvesting difficult and expensive. In humid areas (Chilean South macrozone), the medium planting density had a more important effect on cone yield than on growth. Our study confirms previous research in stone pine native habitats and highlights the need to find an optimum planting density to favor cone yield and harvest.
Descargar
Ver